The Future of a Storied Media Brand

Marketplace is the most widely heard business and economics programming in the U.S., with more than 13 million weekly listeners across nearly 800 public radio stations nationwide. It is noted for its timely, relevant, and accessible coverage of business economics and personal finance.

The world around Marketplace has dramatically changed in the 25 years since it was founded. Previously beholden to a limited number of legacy media channels, audiences today read, watch, and listen across a vast array of digital platforms. Information is suddenly mobile, social, and available anytime, anywhere.

Marketplace recognized that, to keep pace with this changing world, it needed to transform. It had thrived in the media environment of yesterday, where audiences had a finite set of options for consuming news and information. To maintain its place of prominence, Marketplace needed to adapt to the crowded, competitive landscape of today, where consumers move across a wide range of platforms, both new and old.

A changing and noisy world

Marketplace was built for the age of broadcast radio. As a result, its growth was closely tied to the growth of the medium—and beholden to the more passive listening habits broadcast radio served. Marketplace needed to figure out how to exist across the digital and social channels where its audiences were actively engaging and participating in the conversation.

What is the role of public media in a multi-platform landscape?

At the same time, Marketplace had to contend with a growing number of competitors in the business and economics space. Digital and social media had brought new voices to the fore. Some were even adopting the bold, conversational take on the economy that had once been unique to Marketplace. The media brand had to articulate what made its voice special in this increasingly crowded and noisy world.

Rather than shy away from these challenges, Marketplace was running toward them. It was already producing award-winning journalism that changed the way its listeners saw their world. Marketplace recognized an opportunity to have an even deeper connection with its biggest fans, to reach and engage even more people, and to integrate into its audiences’ lives in new and useful ways.

A vision and roadmap for growth

Atlantic 57 empowered Marketplace to adapt and scale as a growing media enterprise. Our work provided a foundation for Marketplace to play a central role in the national conversation, to reach a broader set of audiences, and to ensure its financial strength into the future.

Throughout our engagement, we returned time and again to three fundamental questions: Who does Marketplace serve? What is Marketplace about at its core? How will it succeed in the future?

The core of this work is so strong that it allows me to use it and evolve it practically on a daily basis. As we move forward with new hires and new editorial initiatives at Marketplace, we’ve been able to use the plan as a backdrop for everything.

We began our engagement by unpacking the work ahead of us. We clarified where Marketplace was, where it wanted to go, and the challenges we needed to tackle to get there. Core to this effort was aligning around what we needed to know. What information did we have at our disposal? Where were there gaps in our understanding? This helped us craft an engagement customized to Marketplace’s identity, needs, and ambitions.

Get to know your audience

To reach its potential, Marketplace needed to better understand its audiences—not just as broad demographic groups, but as unique individuals. It had to crystallize what Marketplace meant to them—why they tune in, what role it plays in their lives, what they love about it, and what they have come to expect from it.

Atlantic 57 and Marketplace worked together to develop a deeper understanding of the audiences the media brand engages today and the audiences it could win over tomorrow. Focus groups were central to this effort, as well as a deep review of the other organizations competing for the attention of Marketplace’s target listener. We distilled our findings into personas, which helped us translate Marketplace’s audiences from broad demographic groups into concrete, relatable, and nuanced individuals.

Articulate what makes you special

We used our audience research, Marketplace’s goals, and its market opportunity to zero in on what makes the media brand’s voice special, beyond the radio platform. We articulated Marketplace’s value proposition: raising the economic intelligence of the country through the unorthodox story, the casual conversation, and the unexpected angle on the news. This statement helped inform how Marketplace could experiment, adapt, and grow—while staying true to the steadfast value it provides to listeners. It was designed to be a guiding pillar for the entire organization. 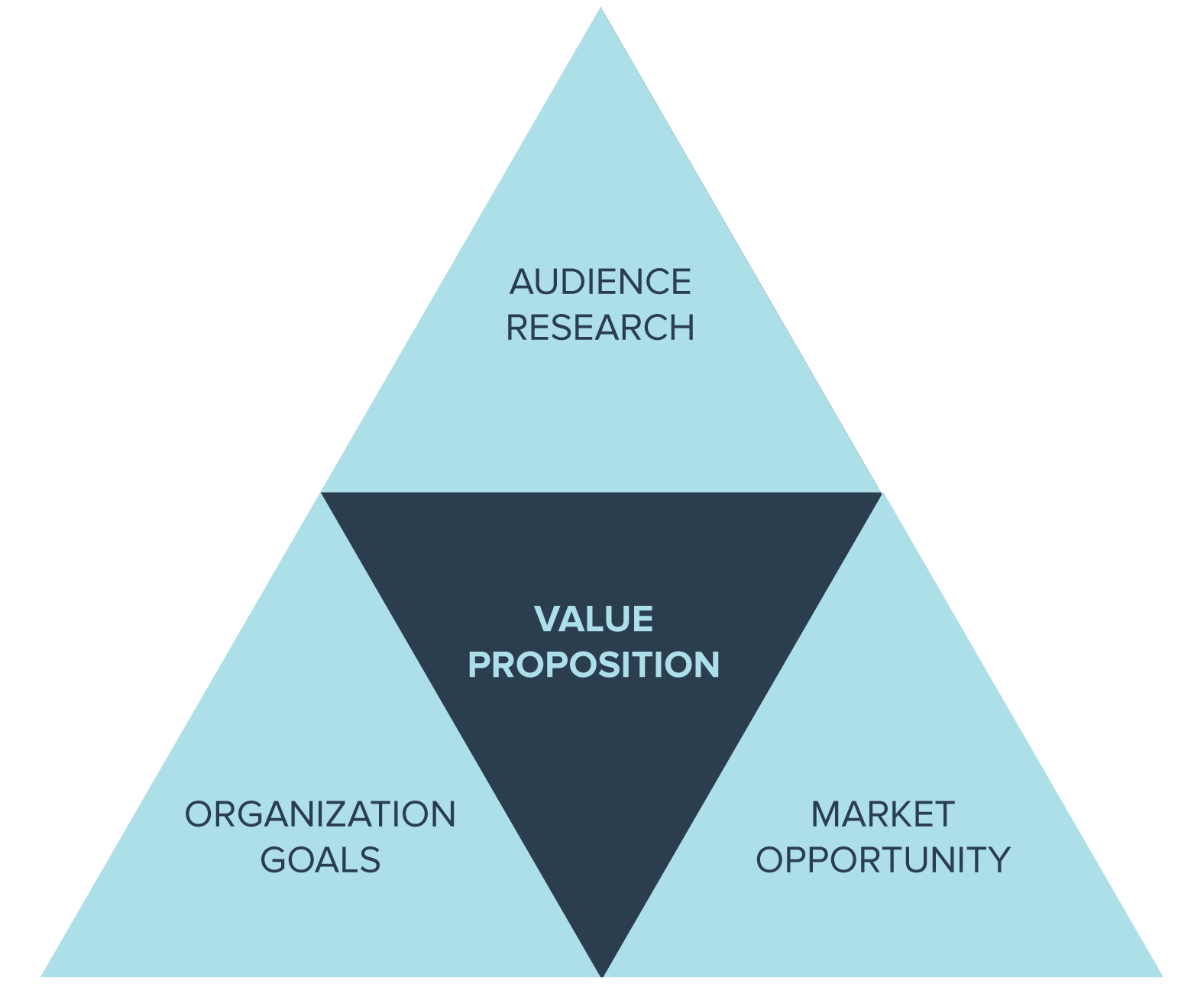 Once Marketplace’s value proposition was succinctly defined, we went on to identify and prioritize core investments that would fuel the organization’s long-term survival and growth. From new content offerings to event programming to community management, we developed a comprehensive set of initiatives that would strengthen Marketplace’s content portfolio, audience engagement tactics, and financial growth.

We helped Marketplace quantify what it could achieve if it fully embraced its new, audience-centered mindset and investment plan. We looked at how other organizations had accomplished the types of success to which Marketplace aspired, with a special focus on revenue achievements and audience development. Based on this research, we developed quantitative target benchmarks to showcase the potential of the ideas, strategies, and growth path we had built together.

Create a roadmap to get there

We armed Marketplace with the strategy and the infrastructure to put our plan in action. We created a five-year action plan, with short, medium, and long-term implementation tactics to map how and when Marketplace should invest in its most promising opportunities. Complete with specific owners, working rhythms, change management processes, and moments for reflection, our action plan was designed to empower Marketplace to take ownership over its growth plan and set it in motion.

The core of this work is so strong that it allows me to use it and evolve it practically on a daily basis. As we move forward with new hires and new editorial initiatives at Marketplace, we’ve been able to use the plan as a backdrop for everything.
— Deborah Clark, Senior Vice President and General Manager, Marketplace